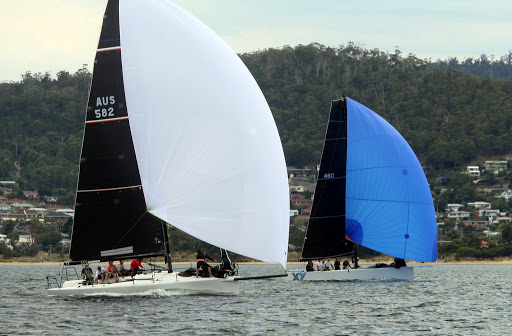 Another day on the Derwent and another day of wins for Shaun Tiedemann’s Sydney 36cr Philosopher on Saturday as she sailed to an overall victory in the Combined Clubs Inshore Series for 2018-19.

Philosopher convincingly won all three Division 1 races under AMS ratings on corrected times and two out of three under IRC scoring.

Yesterday was the final race day of the Inshore Series with race officer Nick Hutton running two windward/leeward and triangle course in keeping with the concept of short, sharp racing around the buoys on the river for the small but elite fleet.

The wins (and a third place) gave Philosopher first place overall in the IRC and AMS handicap categories, adding to the Sydney 36cr’s outstanding season that has included an overall win in the Launceston to Hobart race, division wins in the Maria Island and Bruny Island Races, and a notable IRC division win in the Australian Yachting Championships.

The PHS category of Division 1 went to Paul Boutchard’s Mem, today notching up a 3-31 result to win by half a point from X&Y.

War Games won two of three Division 1 PHS races, but did not figure in the overall top placings.

The final Combined Clubs Summer Pennant Series race will be sailed next Saturday, with Philosopher in line for the IRC pennant.