A group of BYC members got together last year and came to the conclusion that there should be an active BYC cruising group. The Commodore agreed and so we set about getting a cruising calendar together. The members were Mark “Bear” Koppelman (Waisinda), Paul Strong (Phase Three) and Sheenagh Neill and Christian Narkowicz (Tahiti).

Sheenagh accepted and took on the role of Cruise Coordinator of the team, as she had been Vice Commodore of another club and led cruises previously. We all had different skills to contribute but a common theme emerged: interaction with other yacht clubs enjoyment good sailing and a race where possible. The first cruise was the Dave Hansen Memorial Cruise to Taranna in January.
BYC members sailed in company or solo to Lagoon Beach for the first night get together. After the first of many great nights to come simply getting to know each other, we sailed in company down Norfolk Bay towards Taranna. As the large fleet of BYC sailing yachts and motor boats converged on the gap between Dart Island and Sympathy Point. 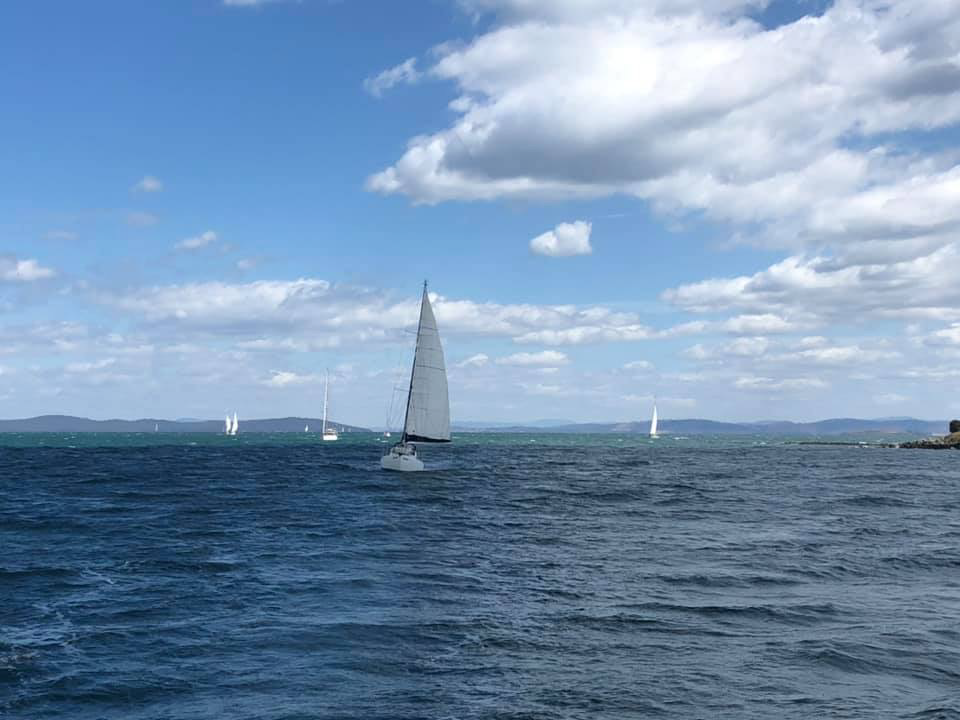 Apparently, the sight brought a tear to the eye of Taranna Boat Club Commodore, Dave Griffiths, watching from the deck of their new club house. He was very pleased to see us all. The Taranna Boat Club made all our BYC members fell very welcome and new friendships were formed. That afternoon Bear led a eventful series of activities.

These included what could be the shortest island circumnavigation yacht race in the world, incorporating a clothing-optional swim. With the apparent demise of the Tasman Regatta at Nubeena, the Dave Hansen Memorial Cruise and Dart Island Race may be set to become the premier nautical event on the Tasman Peninsula. Celebrations and prize giving took up most of the afternoon and evening. Taranna Boat Club are extremely hospitable people and BYC members are always welcome to drop into the clubrooms when in the vicinity. Taranna Bay provides a secure anchorage in most conditions.

The next cruise was timed to incorporate the Spring Bay Boating Club (SBBC) monthly BBQ-get-together, which happens on the second Friday of each month. A smaller fleet transited Denison Canal to Lagoon Bay over night, then to Shoal Bay on Maria for a fish frenzy on the beach, to consume some of the abundant scalefish picked up. Thence to Passage Beach. A couple of boats elected to go outside Schouten and through the passage and the others took the inside route. Boats taking the outer passage explored all the inlets of Schouten on their way We all enjoyed beautiful conditions at Passage Beach, with swimming, fishing, snorkelling and bush walking some of the activities members completed whilst anchored there.

One party of 4 had a very memorable and challenging hike up a nearby granite peak. Much harder than they were led to believe it would be but that made it a significant accomplishment for them. They were rewarded with a crayfish feast on the beach upon their return. 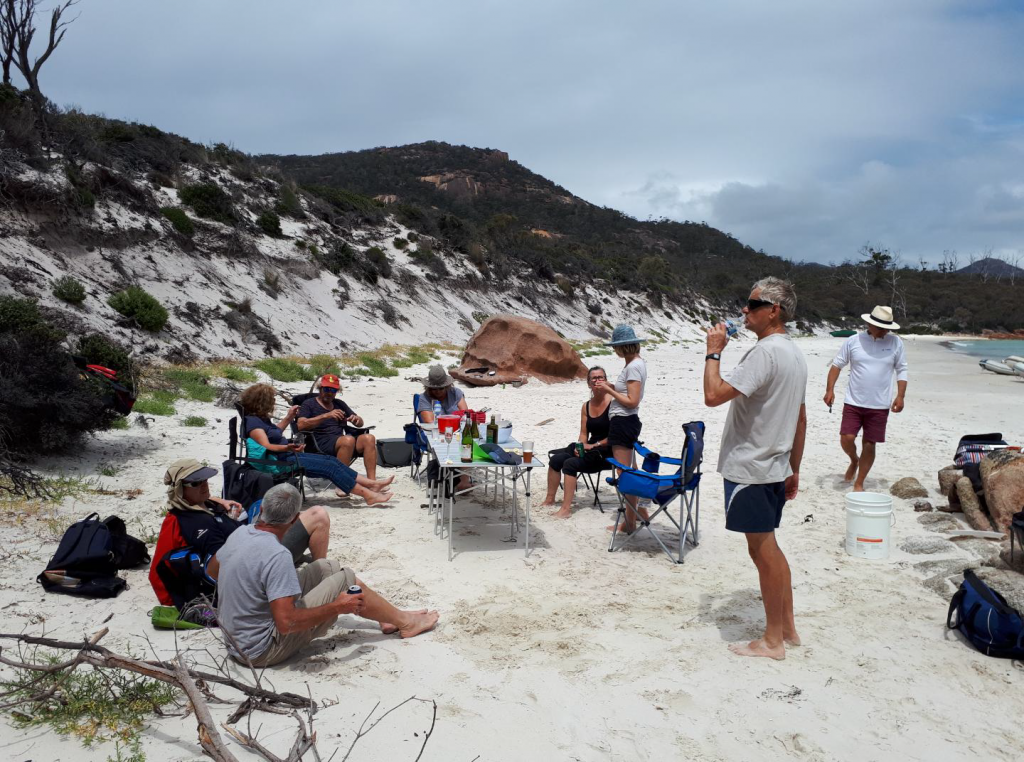 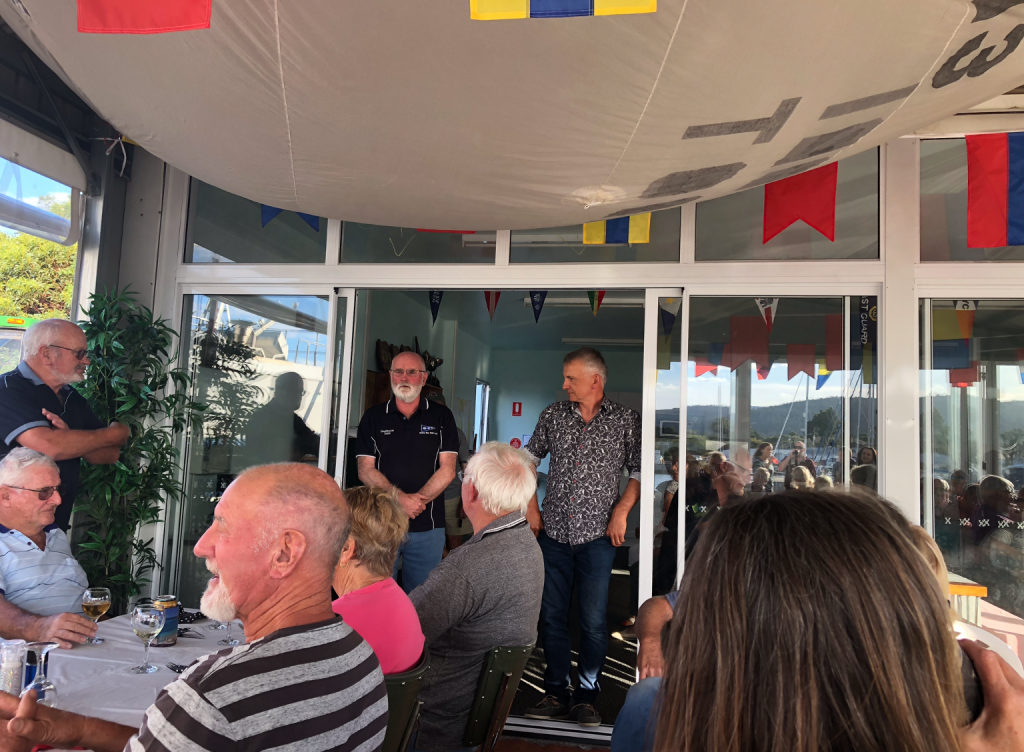 The next day we rode a strong NE breeze down to Orford, making quick time with little sail up. One more enjoyable BBQ ashore before heading up to Triabunna the next morning on the high tide to find berths. SBBC helped to organise berths on their jetty and the adjacent marina. That evening found us at their clubrooms with tables set for almost 100 persons. With the BYC cruisers joining them, they had organised a spit roast with copious salads etc, all for $10 per head. The turnout from club members and friends was astounding.

All the BYC members seemed to know some of the locals and conversations went on into the night. Paul and Christian gave post-dinner talks, and a vote of thanks. Social activities continued aboard vessels after closing time. It was lovely to be tied up in the heart of the town and to spend some time wandering around a place that we usually just drive past. The SBBC Lachlan Island race was held on the Sunday. Unfortunately, because it was the last weekend of the Wooden Boat festival, we all left for Hobart the next morning (Saturday). Next year, if we run a similar cruise, we will encourage BYC boats to stay until Sunday to participate in the race and the festivities afterwards.

The third cruise was held on the March long weekend. Boats made their way to Dover. The Esperance Bay Sailing Club (EBSC) has a couple of moorings there, and the KBC has one. Besides these, there is a good bottom for anchoring and lots of space. Once again, BYC members made good use of the facilities of the town for coffee, unique distilled spirits (containing native sassafras) from the Bakehouse Distillery, food etc. The EBSC have drinks at their clubhouse, conveniently located just up from the beach, on the first Friday of the month.

This was a very convivial gathering of locals and they made BYC members very welcome. A trade table was set up for local produce, such as eggs, vegetables and fruit. There are a few serious sailors down this way who have covered a lot of water in their sailing careers. It made for interesting interactions. One of the locals, knowing that we were hoping for pizzas (no longer available) organised an order of fish and chips to feed us all at $5 per head, and it was very good fish and chips. Once again Paul and Christian said a few words, with a vote of thanks to the club. It was a late night by the time we returned to our boats. 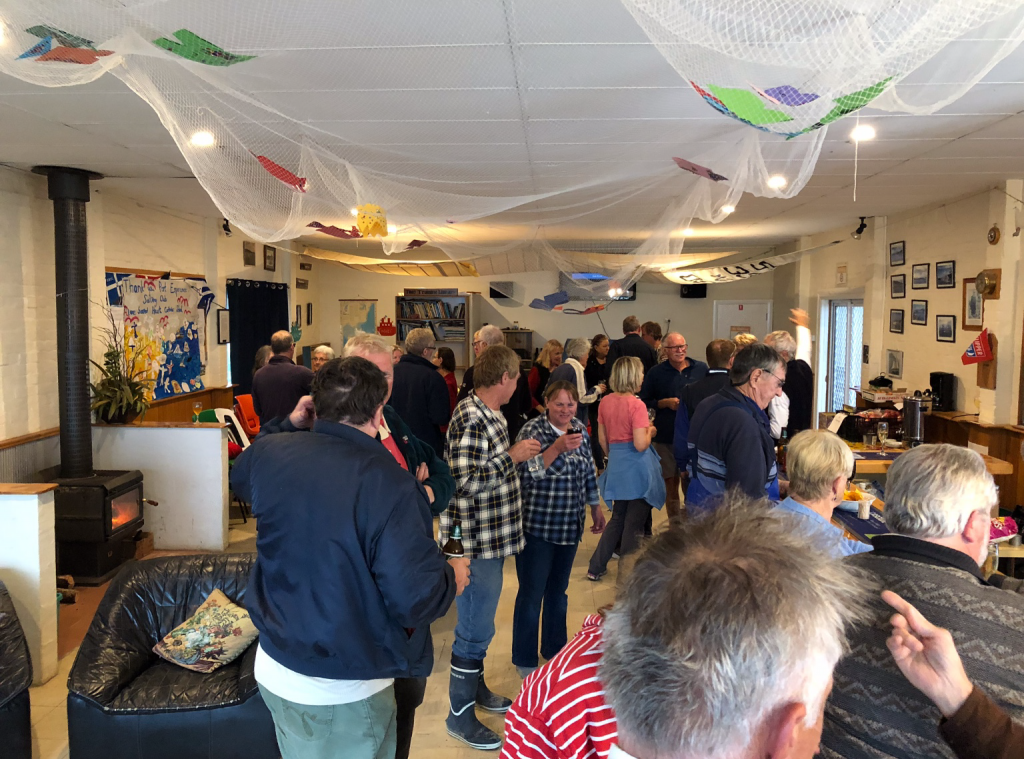 The morning saw us back in town, with some of us having a tour and tasting at the distillery. Then the group went across to Mickeys for a long afternoon and evening by a camp fire. The next morning there was a group walk to Cloudy Lagoon. After this, boats dispersed and made their way back to Bellerive. Steve organised a winter cruise on the June long weekend. Given unfavourable conditions, the group went to the Barnes Bay area. Sheenagh and I had just returned from sailing to Vanuatu at the time and did not participate.

In summary, all of the cruises went without a hitch. Different personnel led different cruises and decision making was good. Interactions with other clubs were all very positive. They will all have us back another time. The Dave Hansen Memorial Cruise has the potential to become an annual event and to grow in participation from BYC members. It has the benefits of being a relatively short distance from Bellerive and having a very safe sheltered anchorage in most conditions. Bear masterminded this cruise and even organised prizes from sponsors. This could become a major event on the cruising calendar. The more extended east coast cruise was very enjoyable and would work best with small numbers (no more than 10 boats).
SBSC could probably accommodate 10 boats but more would result in boats having to anchor in the bay and arrange transport to the clubrooms. The locals would do this if required. We were even offered the free use of a car for 3 days if we wanted it.

There is the potential for boats to come straight to Triabunna from Bellerive for the Friday evening and then stay for the Lachlan Island race on the Sunday, particularly on years between the AWBF. Monday was a public holiday. The Dover cruise had good participation and was enjoyed by all.

There are plenty of options around South Bruny, including going into Cloudy Bay if conditions permit, and circumnavigation. Dover makes a good rendezvous point before heading off elsewhere. The June cruise showed that BYC members like the cruising-in-company concept, and are willing to organise group cruises themselves.

One very positive outcome from the cruises has been getting to know more BYC members through cruising together and interacting on and off the water. One comment I heard was that it has also been beneficial for “partners” to experience very enjoyable sailing and socialising with others, when previously they had experienced “individual” cruising. The BYC certainly has a buzz when boats are getting ready for a cruise.

This year we can look forward to more great cruises. Rod Cushion has also joined to team hoping to host shorter more family orientated cruises. So we all look forward to seeing more members on our great line up for this summers cruise calendar. Which includes the Dave Hansen cruise set for the same date as last year 18 January at the Taranna Boat Club, a cruise around Bruny Island ( late Nov ) , a cruise around Storm Bay ( Dec) , a few shorter family friendly cruises and a large extended cruise to Flinders and Victoria ( late Feb 2020) . The intention is to island hop through Bass Strait to Wilson’s Promontory, Port Phillip Bay and potentially King Island. The return home will be via the West Coast weather permitting, this cruise will see associate members from Sandringham Yacht Club join us and welcome us in Melbourne.

Keep an eye out on the BYC Facebook page or on the new look website for more details on all of these cruises.

A big thanks to Bear ( Mark ) Paul, Christian for their fantastic efforts on last year’s cruises and in anticipation for their efforts to come and our new member Rod.

Sheenagh on behalf of the BYC CRUISE TEAM.