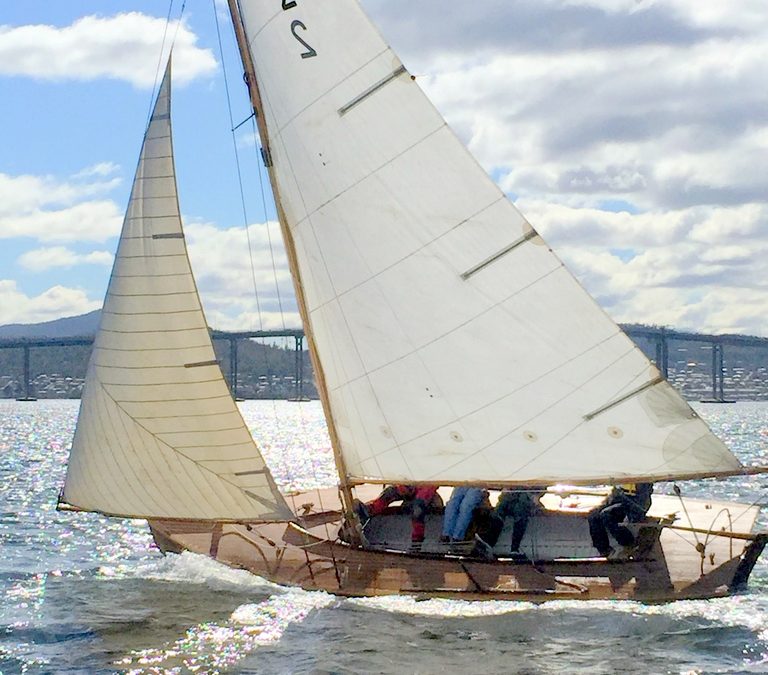 One of Tasmania’s most famous racing yachts, the 21-foot Restricted Class boat Tassie Too, will join Derwent Sailing Squadron boat Young Lion in leading the fleet on the Opening Day of the Yachting Season on Hobart’s River Derwent.

Opening Day, a grand tradition on the Derwent, will be held on Saturday week, 6 October, with Professor The Honourable Kate Warner AC, Governor of Tasmania, taking the salute from aboard the MV Egeria, anchored in Sullivan’s Cove.

Joining the Governor will be Tracy Matthews, her first time in this role as Commodore of the Royal Yacht Club of Tasmania. Last year she hosted Professor Warner when Vice Commodore.

At the helm of the restored Tassie Too will be well-known meteorologist Kenn Batt, a descendent of her famous designer and helmsman, W P ‘Skipper’ Batt.

Steering Young Lion, and first to salute the Governor, will be Derwent Sailing Squadron Commodore Steve Chau, his club chairing the Combined Clubs Series working committee for the 2018-19 yachting season.

Young Lion, a Division 2 pennant-winning Young 88, has been given the honour of leading the colourful sail-past of more than 200 craft that will start off the Regatta Grounds at 2pm and sail/motor into Sullivan’s Cove, leaving the anchored Egeria to port.

Tassie Too (affectionately referred to as ‘TT’), the 90-year-old record-breaking winner of the coveted Forster Cup interstate sailing challenge (10 times between 1928 and 1952) will follow close astern, with Kenn Batt saluting on behalf of the volunteers who have lovingly restored the old wooden yacht.

Astern will come more than 200 ocean and harbour racing yachts, motor cruisers, sports boats and off-the-beach dinghies, one or two ‘gentleman’s steam launches’, a couple of high-flying foiler Moths, even an odd ‘tinnie’.

Tassie Too was designed and skippered by W P ‘Skipper’ Batt along with Alfred Blore and JohnTarleton, and built of Huon and King Billy pine by Charlie Lucas and ‘Chips’ Gronfers.

Descendants of the designer, builders, early skippers and crew members formed the Friends of Tassie Too organisation to return the famous 21-footers to the Royal Yacht Club of Tasmania and undertake a major and ongoing refurbishment.

The FOTT is about to launch a further fund-raiser to continue the maintenance of this remarkably innovative and historic boat that in its winning days captured a huge following in Tasmania.

While the Opening Day of the Yachting Season is a day of celebration afloat for racing yacht owners and their crews, it will be into racing mode next day, Sunday,7 October, as many compete the Royal Yacht Club of Tasmania’s Channel Race.

The long day race has for many decades been the first race of the summer for the RYCT, starting off Castray Esplanade and taking the fleet down to Derwent to finish off Bligh Point in the D’Entrecasteaux Channel.

The first Combined Clubs Series race will be the following Saturday, 13 October.